Skip to content
Bottom Science > Mathematics > An Introduction to Topology 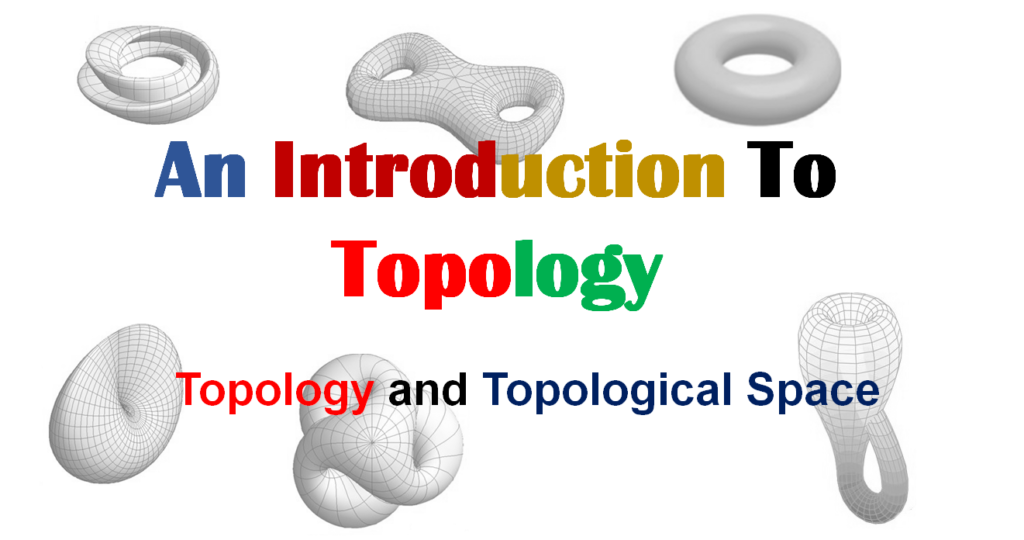 An Introduction to Topology

The word topology is derived from the Greek language. τόπος, ‘place, location’, and λόγος, ‘study’. Hence it is a study of objects, precisely geometric objects which remain constant (technically we call them invariant) if the object undergoes continuous deformation which is stretching it, twisting, bending it. So we study the shapes and sizes of different objects, however, the study of topology is much wider and broader than that of Euclidean geometry.

As we will see that the generalization of Euclidean space, the notions of distances and points are much wider. We always move towards generalization, from Newtonian mechanics to Einstein, from non-Euclidean geometry to Euclidean geometry, from plane surface to curved surfaces, and then to Riemannian manifolds… All these help us to encapsulate formulas and concepts.

The goal towards generalization is that we understand things in a much broader way. If one theory, one formula could give us solutions to many other things, why should we not go for that? You see in our daily world, how we generalize things. In one mobile phone if we get all the features then… A camera, a recorder, a talking device, a messaging device, everything is in one place. Mathematical models also frame the same thing. To make life easier, to encapsulate everything in one place. Topology deals with the same thing. The notion of geometry is much broader here and as we will see it contains various other features which makes the study of shapes much more effective.

Historically, it was Leonhard Euler who first, in his 1736 paper on the Seven Bridges of Königsberg, laid the foundation stone of topology. As a result, the polyhedron formula $V − E + F = 2$ (where $V$, $E$, and $F$ respectively indicate the number of vertices, edges, and faces of the polyhedron) came into play.

Mathematicians consider this to be the first formulation for the subject of topology.

Let us go ahead and first understand this formula.

In Figure 1 we have,

This is what topology does. It finds out the property of one geometrical object and hence tries to find the application of it to others if it satisfies the conditions.

This is a very basic and rough idea of what topology is. There are much more intricacies that we would slowly cover.

Next | Applications of Topology

Shounak Bhattacharya is working as a Director, Training and Placement Department for Asian College of Teachers, Thailand. Apart from training, he is a researcher as well as a teacher in the area of

Shounak has been researching and educating the global crowd in the area of building career opportunities through teaching, researching, and communicating.  Working with Asian College of Teachers, his main focus has been increasing employability factors among young students. The path leads to many factors including teaching, researching, communicating as well as creating a unique model which would employ the right person for the right job.

Relentlessly working in simplifying difficult mathematical concepts, Shounak’s interest revolves around Einstein’s general theory of relativity and creating structures, models, videos to educate the mass. He has been in touch with Prof. Lohiya, a former student of Dr. Stephen Hawking, and has conducted interviews regarding his experience working with Stephen Hawking.

He is working under the guidance of Dr.Richard Sot, Ph.D. Mathematics, University of Rochester, NY and Dr.Santosh Karn, Ph.D., Physics from Delhi University.

He has held numerous live interviews with researchers, educators, teachers, and dignitaries around the globe primarily,

3 thoughts on “An Introduction to Topology”

We are one of the best sources to provide deep knowledge of science concepts and we dedicated to empowering you with the very best information and news of every field of science and technology.