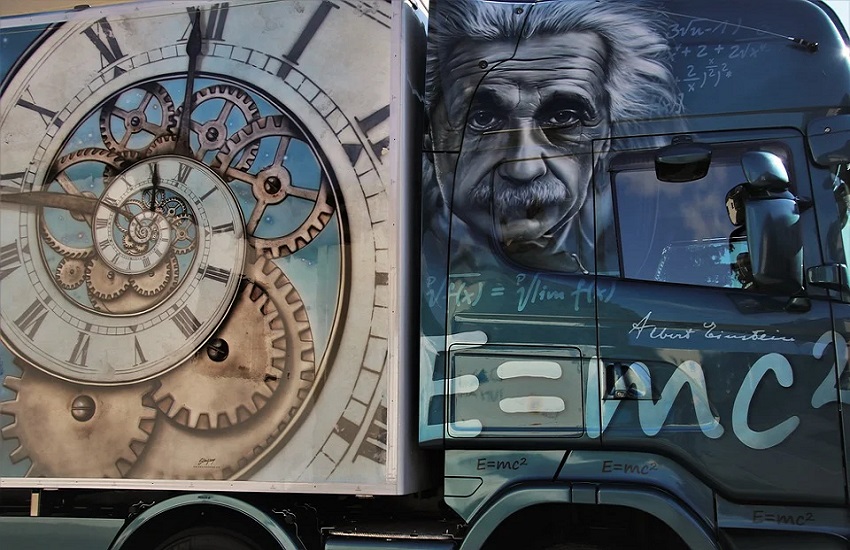 Perhaps the world’s most famous equation of physics is $E=mc^{2}$ which spells out the simple transformation of mass into energy and energy into mass. After Albert Einstein formulated this famous equation, the implication of this famous formula was widespread. Even Einstein perhaps did not know that his creation would create an atomic bomb, responsible for the annihilation of a country, albeit a human race.

If you take the equation and scrutinize into it you find three components: (1) Energy (2) Mass and (c) the speed of light, celeritas, the Latin word for speed.

We understand how the concept of energy, changed over from generation, from Newton, Michael Faraday to Maxwell, and then into nuclear energy. We also have witnessed the development of the concept of mass, further subdivided into neutrons and protons and thereafter to relativistic mass. But what about $c^{2}$ ? How does it come from?

The history goes back to 1700. A young lady Emile du Chatelet (17 December 1706  – 10 September 1749), was pondering upon the works of Newton, Leibniz, and Christian Wolff. A brilliant physicist, mathematician, and linguist, her crowning achievement was her commentary on Newton’s work on Principia Mathematica. Du Chatelet worked closely with Voltaire, the eminent French philosopher, and historian. She and Voltaire had been a long-time companion and du Chatelet made significant contributions in Éléments de la philosophie de Newton, Elements of the Philosophy of Newton in 1738. This helped to popularize the theories and thoughts of Newton.

What Is The Vis-Viva Equation?

In Latin vis viva means “living force”, a terms which we now call as kinetic energy. If we take $m$ orbiting around a body, which has a mass $M$ and let $v$ be the velocity, $r$ be a distance from $M$ and if $a$ be the semi major axis of the orbit then the kinetic energy is given by:

This is widely used in astrodynamics and is also referred to as the orbital-energy-invariance law. Please note that we are not here to make any mathematical derivation. This is to just give the readers an idea. This equation is also used in Hohmann transfer which our Mars orbiter Mangalyaan used to reach the destination.

The concept of transferable energy was not very prevalent. It actually reached its maturity in the 19th.century. However young du Chatelet found an important work of German philosopher Leibniz, contradicting in some way the work of Descartes and Newton. At least a hundred years back from Chatelet’s era, Gottfried Wilhelm Leibniz, the famous philosopher, who independently founded calculus, was caught upon the concepts of momentum $(mv)$ and kinetic energy $\frac{1}{2}mv^{2}$

“The notion of force is as clear as that of activity and of passivity, for it is that from which activity follows, when nothing prevents it.”  (Statement of Leibniz’s philosophy, Monadology, Page 91)

Robert Latta, in his introduction to Monadology and Other Philosophical Writings, writes:

‘Descartes rightly insisted on the quantity of effect as the thing to be measured; but he conceived the effect in too narrow a way, regarding it merely as actual motion (i. e. the momentum acquired by a body) rather than the work done by the force, the kinetic energy it produces (i.e. the vis viva which the body acquires, and which Leibniz calls action motrice). The formula for this action motrice is not $mv$ but $mv^{2}$. In the history of science, vis viva – living force is the early definition of conservation of energy, the first definition of kinetic energy. For the Cartesian philosopher, energy is indistinct from momentum, hence proportional to velocity.’

Let us see an example:

Putting the values, we get

Hence, when you double your speed i.e. make $v=2$ you get the equation as

The above equation has been put forward by Leibniz, in his magnum opus Monadology as follows :

Thus actions are proportional to the squares of the velocities. But most fortunately this happens to agree with my calculation of force, drawn both from experiments and from the presupposition that there is no mechanical perpetual motion. According to my calculation, forces are proportional to the heights by descending from which heavy bodies might have obtained their velocities, that is to say, as the squares of the velocities. And as there is always conserved the total force for re-ascending to the same height or for producing same other effects, it follows that there is conserved also the same quantity of motive “force” [action mortice] in the world, that is to say, to put it definitely, that in one hour there is as much action mortice in the universe as there is in any other hour. But at every moment, the same quantity is conserved. And in fact, action is nothing but the exercise of force and amounts to the product of the force into the time.”

As you can see three important points emerges from Leibniz’s statement:

All of the above-mentioned points, bring us close to $mv^{2}$ and as you can understand the speed of an object, roughly speaking, can approach the speed of a higher and further higher and then close to $c$, the speed of light. Generations later when Einstein formulated his formula, we forgot our roots, how and where from he got this $c^2$ part.

Chatelet took up the deep underlying principle of Leibniz on an experimental basis, as finally, science would only confirm to experimental proof.

Emile du Chatelet publicized an experiment, devised by Gravensande, a Dutch philosopher, where balls were dropped from a certain height on soft clay. Each ball’s kinetic energy was shown to be proportional to the square of the velocity.

““Now, finally, there was a strong justification for considering $mv^{2}$ as a fruitful definition of energy.”

Over a period of time, scientists became aware of the $mv^{2}$ and hence it became something equivalent to the form of energy. So, you know that throwing an object at 20 kmph would require an energy equivalent to its mass time of 20 kmph squared.

On 3rd.September 1749, she gave birth to a daughter as a result of her affair with de Saint-Lambert but died a week later at Luneville at the age of 42.

Voltaire wrote about her in a letter “a great man whose only fault was being a woman.”

(1) Éléments de la philosophie de Newton by Voltaire
(2) The Monadology and other philosophical writings by Robert Latta
(3) Passionate Minds: Emilie du Chatelet, Voltaire, and the Great Love Affair of the Enlightenment By David Bodanis
(4) Leibniz and the Vis Viva Controversy by Carolyn Iltis
(5) Meditations on First Philosophy by René Descartes
(6) Voltaire’s letter to King of Prussia
(7) Seduced by logic by Robyn Arianrhod

Shounak Bhattacharya is working as a Director, Training and Placement Department for Asian College of Teachers, Thailand. Apart from training, he is a researcher as well as a teacher in the area of

Shounak has been researching and educating the global crowd in the area of building career opportunities through teaching, researching, and communicating.  Working with Asian College of Teachers, his main focus has been increasing employability factors among young students. The path leads to many factors including teaching, researching, communicating as well as creating a unique model which would employ the right person for the right job.

Relentlessly working in simplifying difficult mathematical concepts, Shounak’s interest revolves around Einstein’s general theory of relativity and creating structures, models, videos to educate the mass. He has been in touch with Prof. Lohiya, a former student of Dr. Stephen Hawking, and has conducted interviews regarding his experience working with Stephen Hawking.

He is working under the guidance of Dr.Richard Sot, Ph.D. Mathematics, University of Rochester, NY and Dr.Santosh Karn, Ph.D., Physics from Delhi University.

He has held numerous live interviews with researchers, educators, teachers, and dignitaries around the globe primarily,

We are one of the best sources to provide deep knowledge of science concepts and we dedicated to empowering you with the very best information and news of every field of science and technology.